If you have been coming to the Devonport Craft Market for a while you will have come across Marianne from Gretel's Gingerbread. Marianne has been making and selling her amazing Swiss German style gingerbread specialities and other European style goodies (with a Kiwi Twist) at the market for over a year. 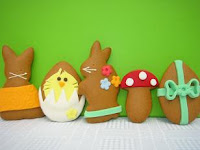 Marianne grew up on a Heidi style farm in Switzerland which turned her into a person who wanted to make stuff! 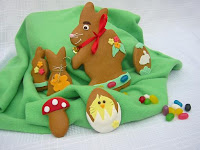 Inspired, Marianne decided to do an apprenticeship as a pastry chef and completed it with success after 3 years.  One qualified, Marianne worked as a pastry chef in the French speaking and in the Italian speaking part of Switzerland and then decided that she needed to learn English which brought her to the U.S.A as a nanny. Marianne's time as nanny inspired her to further her career by going back to school.  After completing a business degree, she worked in the travel industry for 8 years where she was able to use her language skills.
Being a challenge driven person, Marianne decided to expand her horizon's and make a big move to  New Zealand  where she worked in sales and marketing before setting up Gretel's Gingerbread 4 years ago. Running Gretel's Gingerbread gives Marianne the  opportunity to use her cooking skills together with her business and people skills to make her customers happy with her delectable treats. 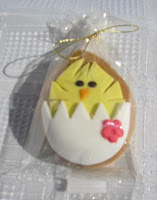 Posted by Songbird Designs at 9:25 PM No comments:

Meet Sarah from Songbird Designs.
Sarah has been selling at the Devonport Craft Market since August 2009. Part of the Craft Market organising partnership, Sarah and Songbird Designs are now a part of the furniture! Read more about Sarah's inspirations and where it all began.
Who are you and what do you do?
I'm Sarah and I am and I make a range of things from hair accessories to  jewellery to paper goods and stationary.  All of my bits and pieces come with a vintage, floral, romantic feel.
How long have you been crafting and what is your first crafting memory or experience?
In some way or other I have been crafting since I was small however I have concentrated on craft and been selling it since 2005 or so with the activity and selling ramping up in 2008-2009.
My first memory of crafting was making cards (hand-drawn -no less!) to sell at my Mother’s 40th Birthday party. I marched in to the party and demanded people come to my ‘stall’ which I had set up in the hall of our house. From memory I charged 2c a card – not many people left the hall without a card under their arm! 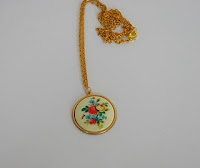 What inspires you?
So many things inspire me. Fabric colours and designs. Blogs. Art. Nature.  You name it, I can draw inspiration from it! I am drawn to things with a retro, vintage, romantic look and feel.

What is your favourite blog  / book and food?
I read heaps of blogs – Creature Comforts is a favourite as is Design Sponge, Decor 8,  Daydream Lily… I could spend hours and hours looking at them.
Why buy handmade?
Because you know where its comes from, because you can often meet the person who made it, because it likely to be unique and special.

When you are not at The Devonport Craft Market where can people buy your things?
You can find me on Felt and I also sell via email for people who have seen what they want!
I also sell to a number of Retail shops around the country. See my blog for details.
Posted by Songbird Designs at 7:15 PM 2 comments:

Want to sell at the Devonport Craft Market?

Check out the Sellers Information Page above!

Promote your Page too

Unsubscribe from our newsletter